The defender will often find it expedient to attack the flank of an enemy penetration with the objective of cutting off and destroying the hostile forces that have broken through. Such tactics are effective only when a secure shoulder provides the defender with a spring board for an attack which is launched straight across the gap to the other shoulder, or when a natural obstacle, such as a large body of water or a swamp, serves as an anvil against which he can crush the attacker. An effective flank attack requires a balanced force with adequate striking power whose strength need not necessarily exceed one-third of the total enemy forces committed in the break-through. The more powerful and mobile the force, the quicker the defender will attain his objective. Unsupported infantry is incapable of mounting a successful flank attack against an armored penetration. In such a situation infantry must always be supported by strong assault gun and armored units as well as sizable antitank forces.

The defender who attacks the flank of an enemy penetration runs the risk of exposing his own flank and must therefore take this factor into account when he plans the counterattack. The danger is usually less serious than anticipated because, during the initial stages of the break-through, the attacker usually commits his forces almost exclusively along the axis of advance without giving much attention to his flanks. These rush tactics are practical, however, only so long as the defender has neither the means nor the opportunity for immediate, effective counteraction. During their invasion of Russia in 1941, for instance, the Germans did not present the Russians with any such opening. On the other hand, during the Eussian counteroffenses in 1942, the German command always had strong armored forces at its disposal, making it inadvisable for the enemy to be careless in exposing his flanks. Bitter experience was to teach the Russian that flanks must be protected until he finally made them so tank-proof that they could only be overpowered with heavy casualties. For this reason the German flank attacks gradually lost their sting after 1943 and were more often repulsed.

Flank attacks are particularly effective when employed to eliminate hostile river crossings. The forces which cross first can usually be shattered or wiped out without too much difficulty because they rarely have adequate defensive protection. This happened, for instance, along the Teterev in December 1943. The defender will find it much more difficult, well-nigh impossible, to eliminate a strongly fortified enemy bridgehead which has adequate fire support from the far bank of the river. 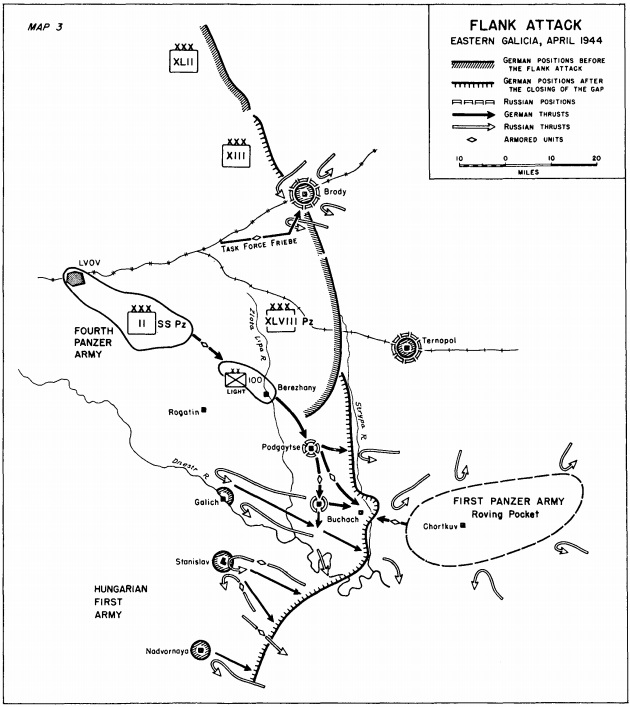